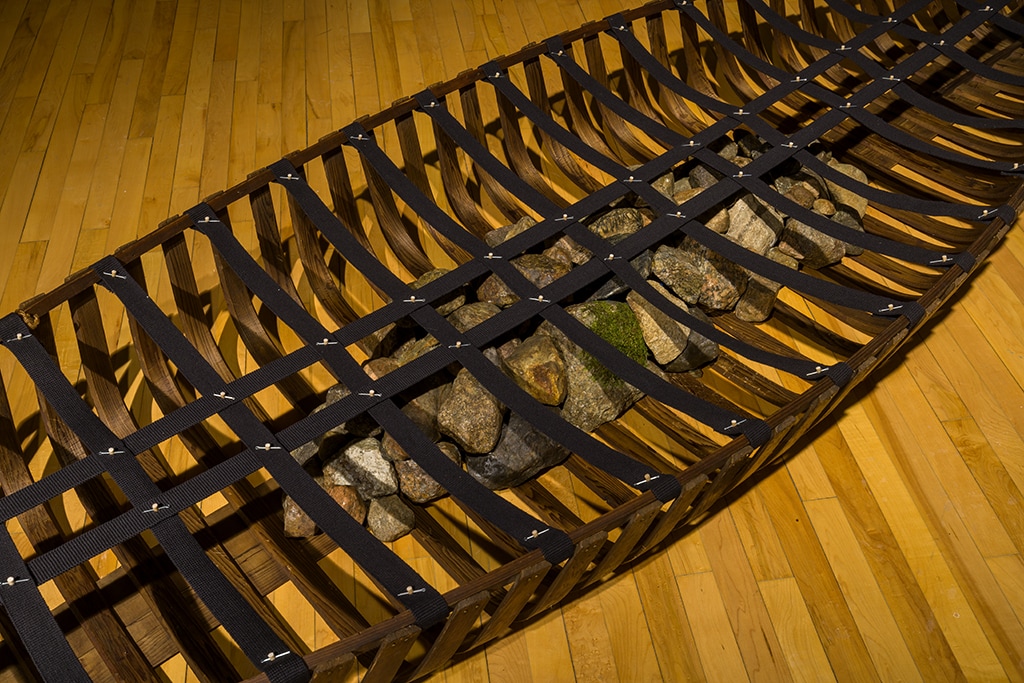 Mortsaf for My Father: Safe Passage, 40" x 158", Circa 1915 cedar canoe frame, cotton webbing, pine dowels, stainless steel cotter pins, 85.8 Kg (189 lbs) Laurentian stone, Bluetooth speaker, 2014 – 2016
​Souvenir/Souvenir can be viewed from two perspectives of the word souvenir: the English connotation of memento, and the French of memory and remembrance. One interpretation does not supersede the other; I view them as complementary.

This exhibition may be seen as an homage to my father, who died in 2012. Growing up, my family had a log house on a lake in the Laurentian mountains, and it was that place that I most closely identified with him. In 2004, my family sold the house.  From that time until 2012, when my father died, I found it very difficult to look at photos or drawings of the lake. After my father died, I discovered that while I still find it very difficult to look at pictures of him, I can now look at the thirty-plus years of material from the lake.
​
Typical of the Laurentian geography are massive granite boulders, and my father and I gave our own private names to many of those that ring the lake. I began to paint large-scale pictures of these (Mortsaf for My Father: Balcony Rock, 2014; Mortsaf for My Father: Resting Rock, 2014-2016).

Safe Passage references the innumerable boat or canoe trips taken up and down the creek to the lake – there was no road into our cottage; you would have to walk out to the creek. The antique frame of the canoe resembles a mortsaf, an iron cage in which a coffin would be placed as a protection against resurrectionists, or body snatchers.

The text which can be found on gravestones is also of great interest to me. How to convey a life lived in but a few lines? What impressions of that person are we left with? We allude to the permanence of things as being “writ in stone”, implying that the text we choose represents us in perpetuity. Yet often the text found on gravestones is formulaic, denying us a look at who that individual truly was. What words would I choose?  This led to my Souvenir sacré series of photographs of portions of text I found in graveyards throughout the country, often just single words. The photos here represent text which I feel reflects my father.