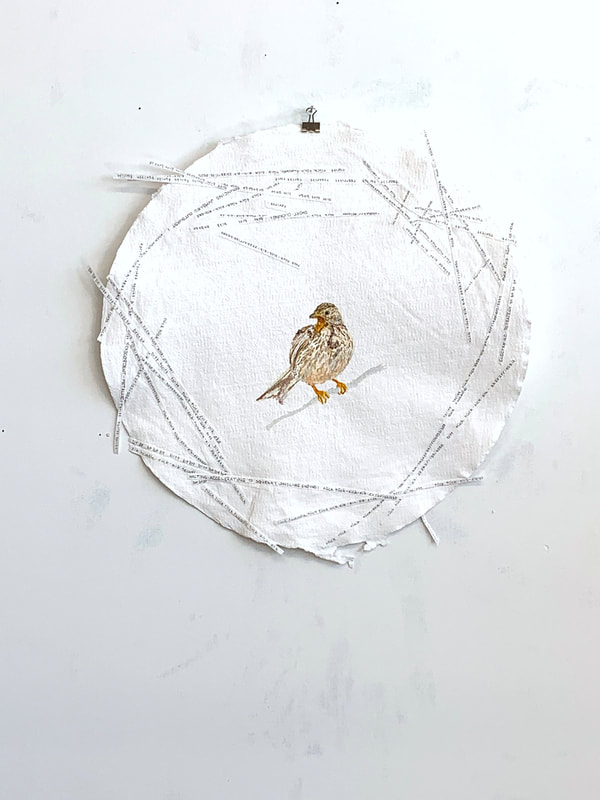 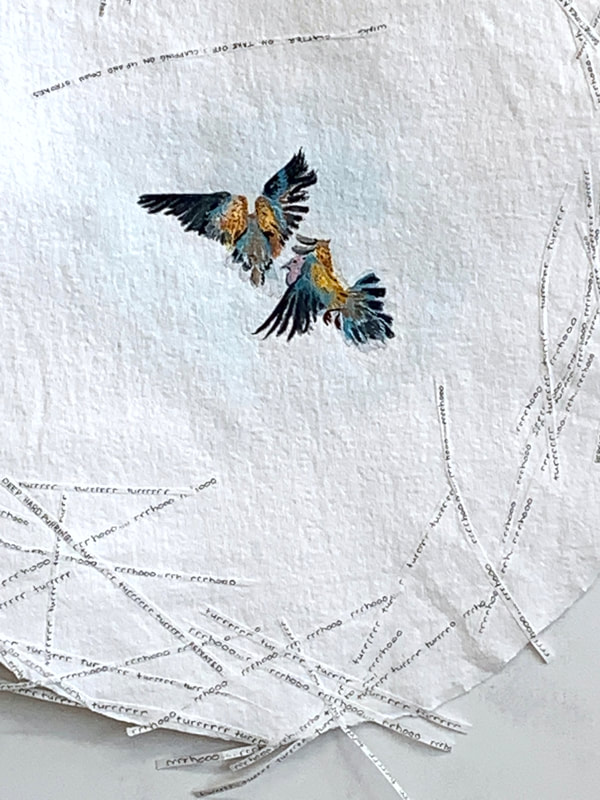 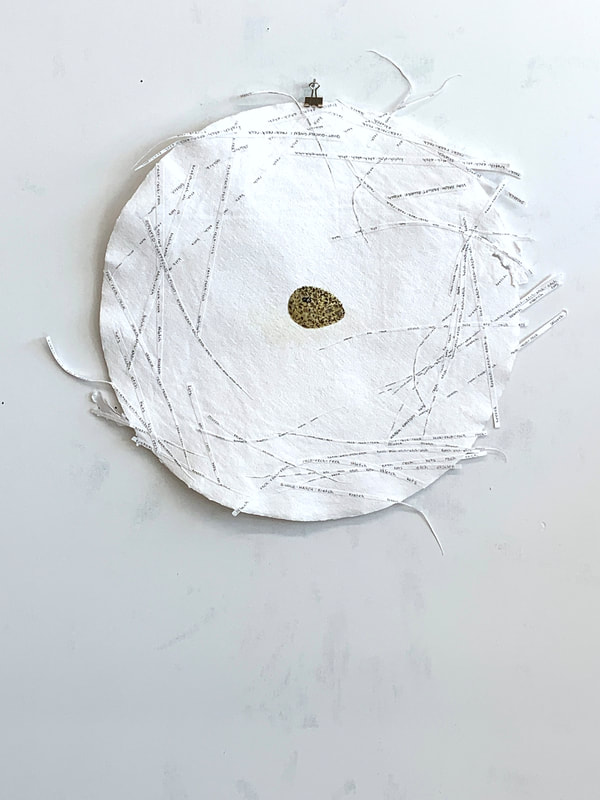 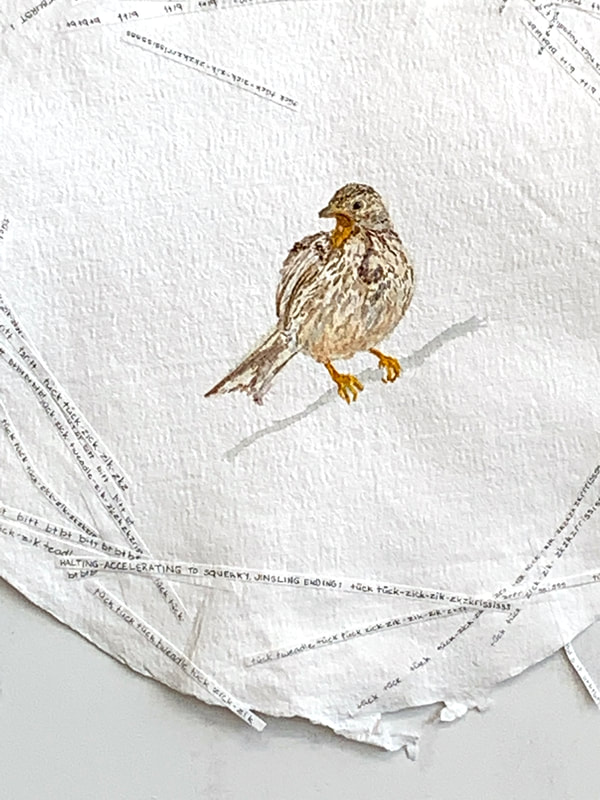 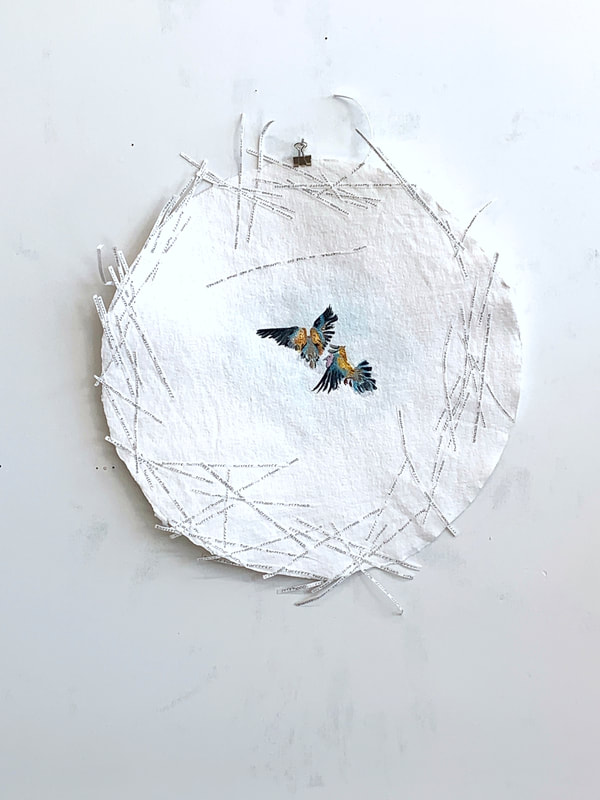 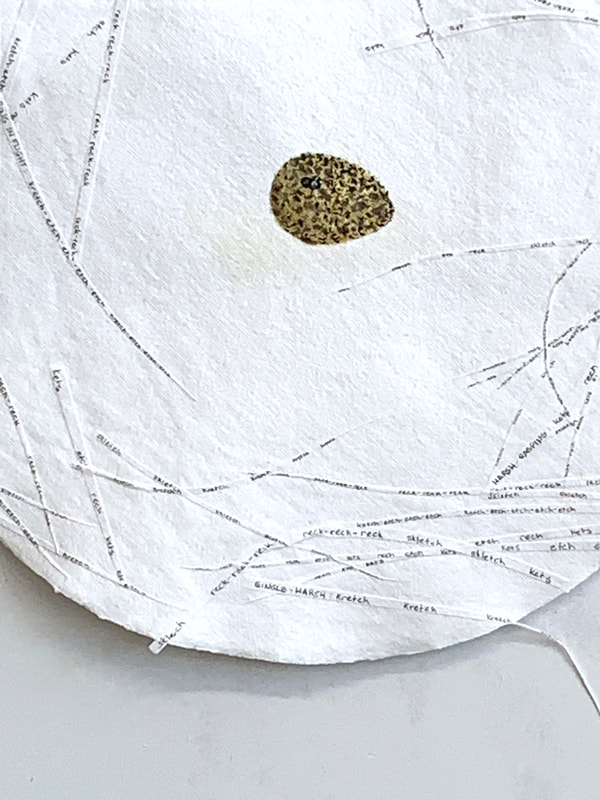 Detail: Sociable Lapwing / Steppenkiebitz / Vanellus gregarius, Acrylic ink, graphite pencil on custom St-Armand paper, 18" Dia, 2021
Deborah Carruthers, Between the Song and the Silence: Hobrechtsfelde,  Germany , 3 of 17 drawings, 2021
Tinsquo's curatorial project, Adjacent To Life, presents Announcing the Coming of the Sun.This exhibition brings together the work of four artists all working with issues of replication and regeneration in a multifaceted approach to both process and content. By applying techniques of printmaking, collage, photomontage and painting each artist engages the social issues of contemporary life through artworks of multi-layered intention in their imagery and installation. The artists address the entangled and sprawling problems that have been unleashed on the planet in the time of the Anthropocene and speak to the precariousness and complexities of Being in this posthuman era.
The works represent a connection between visions of the Anthropocene as both an epic challenge and an opportunity to de-center the human and imagine a different, more accurate, empathetic, functional and enlivening relationship to other beings and systems. Here the artist acts as imaginative liaison for the agency of different beings, forms and structures, including that of future arrangements or yet-to-be-discovered loves.
Deborah Carruthers presents studies for a graphic score, Between the Song and the Silence: Hobrechtsfelde, Germany, based on the sounds of songbirds that have been largely extirpated from a now-verdant yet still-toxic landscape in Germany, while Margaret Hart envisions the intersection of human and non-human beings as a form of ever evolving patterns of life.
Gabriel Deerman sheds light on the linkages between Earth and human-induced change through repetition and chance. Mark Roth posits the idea that Being itself is ecstasy - with the sun as the animating energy that activates everything in our orbit.

Participating Artists:
Deborah Carruthers (Montréal, Québec, Canada)
The role of art and artists in providing a record of our evolving landscapes and environment is incalculable. Artwork can provide a record and timeline of loss and allow us to view and estimate rates of change. It can create nascent memories of what has vanished and remind us of our role in that loss. It can translate alternate perspectives of our ecologies and provoke public discourse.
As an artist who has often been preoccupied with translating environmental concerns into an artistic narrative, the opportunity to work with scientists in unpacking complex ideas and presenting them in another form has been critical to my practice.
Gabriel Deerman (Bella Bella, British Columbia, Canada)
These works began with a single climate change-related issue: Pine Beetle infestations. These have a status in common with contemporary weather events of being a ‘natural disaster’. The devastating effects of these sprawling infestations in North America can be traced back to logging practices that created ideal breeding conditions and were exacerbated by rising temperatures. In looking for the root of this specific problem, I was led from the boards my home is built with to the foundations of western rational thought, modernity, modernization and colonialism. When I began to trace the effects, they expanded outward from localized destruction of ecosystems to wildfires, to shifting economies, populations, and animal migratory patterns - creating a feedback loop which amplifies the already overwhelming situation. This particular issue serves as one example of the entangled, interwoven and self-replicating/perpetuation nature of the problems that unbridled capitalism has unleashed on this planet and the enormity and irreducibility of human impact in the Anthropocene.
Margaret Hart (Boston, Massachusetts, USA)
These new works are an evolution of an earlier body of work, the Situated Becomings series, where I considered the evolving understanding of gender in these Posthuman times. These works continue to explore gender issues across human and non-human integration, where gender is a form of becoming…becoming something new and expansive.
Science and art are my two main interests, and in this work I see them combined in imaginative ways. Genetic manipulation afforded by CRISPR technologies and our developing sense of the agency of all non-human beings merge in these pieces to explore possible outcomes or connections. Nature and technology have much to teach us and are venues to an expanded sense of humanity. My work scratches the surface of what may be and what is possible.
Mark Roth (New York, New York, USA)
Aurora is about the idea that Being itself is ecstasy. The sun/aurora/dawn is ecstasy and activates ecstasy. The grasses (a quote of Albrecht Dürer’s Great Piece of Turf) represent revery taking form. This visual quote along with the allusions to Bridget Riley and Frank Stella are intended to indicate an equivalency in terms of operation and nurturance between the ecosystems of Nature and Art.
Announcing the Coming of the Sun runs through April 23 and is on view at the Adjacent to Life pop-up gallery housed in Ninth Street Espresso (341 E. 10th Street at Ave B, New York City).
Thank you to the Artblog Tinsquo for permission to use this article.