​reading between the lines: Graphic Score

Some background on the Witness

Google map view from July 2019, with the Witness tree circled in red. It was cut down shortly thereafter.
​Who are the Witnesses to environmental change?
What form do their memories take?
Where are memories kept?
When are memories revealed?
How are memories expressed?

My work often centres around anthropocentric questions involving the more-than-human and environment, particularly regarding solastalgia. Solastalgia refers to the distress that is felt when the environment changes, but one is unable to leave, and certainly relates to the situation experienced by trees, rooted in  place as they are.

reading between the lines considers the specific testimony of one Witness tree which is on the historical site of the Maison Saint-Gabriel in Point St. Charles, Montréal, Québec, Canada. An Acer saccharum ( sugar maple), Witness is a specie of flowering plant in the soapberry and lychee family Sapindaceae. They are believed to have germinated in 1919 and stood tall until 2019.
I researched its visual and environmental history ,as well as its present stump-state, and reacted to it with drawings, calkings and tracings of this stump. The resulting graphic score combines the scientific and the artistic, and endeavours to present a visual and sonic portrait of the Witness.

About My Graphic Scores…

Graphic scores in general do not have to contain any musical notation – although some may incorporate notations in unusual configurations.
My scores contain no traditional musical notation whatsoever: reading between the lines  has no temporal or pitch indications; although it has a suggestion related to the overall length of the work to facilitate working together.
Although the kind and number of instruments to be used are suggested, they should not be an impediment to any kind of investigation .
It will produce a unique piece each time it is played.
It will encourage close listening – a necessary thing in these kinds of dialogues.
It will (hopefully) inspire experimentation.

It is not a free improvisation.
Structured improvisations provide a framework to examine ideas, themes, and sound.
Instructions for musicians...

The graphic score consists of three scrolls hung evenly above a circular tondo and is a portrait of Witness from 1919 to 2019.

This piece was originally conceived of as being performed by a trio: Cello, recorder, and percussion
having a length of 12-15 minutes total.

As the timescale of sugar maple trees is likely different from ours, I would suggest that this too may be mutable.

There are three 5-minute animated videos of the scrolls to assist musicians playing the work with timing (Video: Terri Hron).

The portrait is also animated, and is meant to be played for 7 –10 minutes

The three scrolls at the top represent the three major influences on Witness: Climate (blue), Heath and Growth cycles (green/yellow), and Pollution (red).

Together they represent the light spectrum of sunlight that nourishes Witness.

The coloured marks represent data that significantly impacted Witness.
In winnowing through available data, an impact threshold was established across all categories which determined whether an event was included.

One event can pause or potentiate other events in other categories.
One event can cause or pause another within a category.
Events can overlap.

Polluting events (red) are often short and abrupt and are often difficult to presage.

The impact of Health events (green) may extend over several seasons, while Growth (yellow)is restricted to all but the coldest season, in which it is all but suspended.

For example, drought can slow, almost stop growth. A chemical spill can allow for an opportunistic insect infestation which invisibly weakens limbs making them vulnerable to ice storms.

Temporally, they represent 10 decades – 400 seasons – in human timescale it is intended to be played in 5 minutes with each decade passing in approximately 30 seconds (time flies, it is said!). 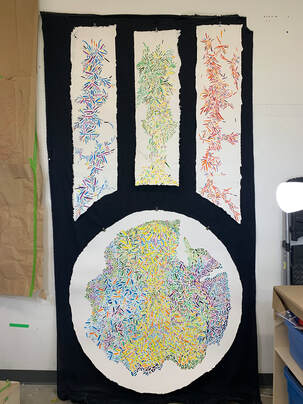 Is portrait which represents a portion of Witness’s trunk.

It is intended that musicians embody who Witness is: a combination of all that has impacted them over 400 seasons.

They were solitary for most of that time.

Trees are not encouraged in such spaces.
Sugar maples, though, are special, and attract many species: insects, avians, amphibians, mammals.

Witness was encouraged because their sap could be repeatedly harvested by large mammals.

For most of their seasons, they could not communicate with others of their kind. For the last 12-15 seasons there was another of its kind in proximity, but it was not its progeny.

They were often nourished by lead, mercury, cadmium, and diesel fuel.
​
Additional biographical notes for musicians…

Witness lives their life on the Ferme Saint Gabriel, an historic farm on the shore of the Fleuve Saint-Laurent, in what is now known as Point Saint Charles, Montréal, Québec, Canada. Witness is believed to have germinated in 1919 and stood tall until 2019.

An Acer saccharum, a sugar maple, Witness is a species of flowering plant in the soapberry and lychee family Sapindaceae.

They stood tall and straight, reaching outward and upward creating a crown more impressive than that which can be found in any vault. Their jewels revealed and renewed themselves as the seasons changed, emeralds turning to rubies and then to dust.

Their trunk is about four feet in diameter when they are deemed to be a danger to others after 400 seasons had passed.

The bark around it is smooth throughout their first seasons, becoming shaggy over time.

Witness is an alchemist, turning sunlight into air.

Their sap is sweet and freely shared when Witness renews itself.

Roots stretch out to find nourishment and companionship, the former dubious, the latter virtually non-existent.

Their jewelled crown distracted others with their beauty, hiding the corruptions that formed beneath their bark.
Much thanks to the musicians Norman Adams, Terri Hron and Jessica Tsang for their creativity and engagement with this work; Terri Hron for her invaluable work; the Sensing Places, Changing Times working group for its feedback; Sandeep Bhagwati, Jen Reimer and Charles Harding for their organizational support; and matralab for financial support. ​