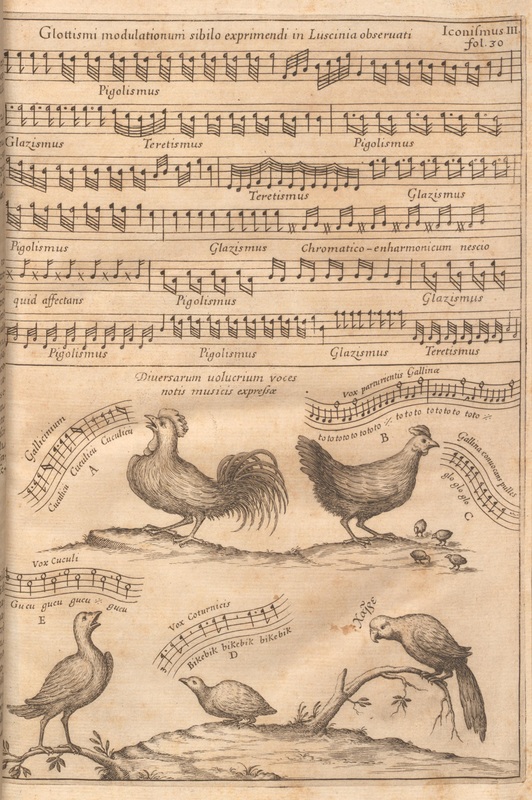 Musurgia Universalis: Bird Songs. Athanasius Kircher, Vol. I opp. 30, etching, Rome, 1650. Division of Rare Book and Manuscript Collections, Cornell University Library, ARTstor. Web. April 6, 2016. The parrot, lower right, is saying "Hello" in Greek.
Between the Song and the Silence
Turning memory into narrative is common practice in the human experience. Our memories become entwined with the recollections of others, so that each time we recall them they subtly change. This layering of narrative, or collective memory, can serve to reinforce our perceptions of both our past and potential futures [1, 2].
I am in the process of creating a libretto for a place-specific performance. The calls of extinct or threatened birds will be performed within a narrative crafted from my memories of an encounter between two elderly birdwatchers.
In using these bird calls, I hope to be able to transport my audience to an interior emotional setting whereby they may feel more sensitive to the absences in their environments.
As Ghassan Hage has said, “Song and music in particular, with their sub-symbolic meaningful qualities are often most appropriate in facilitating the voyage to this imaginary space of feelings”[3]. So too can sounds transport us [4-6].
The research with which I am engaged had its genesis in reminiscences at our family cottage in the Laurentian mountains of Québec about things no longer seen nor heard.
We all reminisced about what it used to sound like up there, about the complexity of the combined sounds of birds and wildlife. How the bass cacophony of bullfrogs in the evening could keep you from falling asleep, while the howling of the wolves nearby would make you shiver deliciously under the covers. The banshee laughing and wailing of loons would fade away to be replaced by the dignified hooting of owls.
It doesn’t sound like that anymore. To hear one bullfrog is cause to “shush” everyone, while the rare occasion that the wolves sing at night is remarked upon by all the neighbours, and is something you’d tell the cashier about at the store in town.
Visitors often remark now about the quality of the silence there, about how “beautiful and quiet” it is.
Is It?
We are firmly entrenched in a soon-to-be christened epoch, dubbed the “Anthropocene” by atmospheric chemist Paul Crutzen and diatom biologist Eugene Stoermer. It is defined as a new geologic age in which the activities of humans have significantly impacted our global climate, environment and ecology to such an extent as to permanently mark the lithosphere.  This age is commonly referred to as the “sixth extinction”, marked by rapid declines in biodiversity as more and more species become vulnerable to changes in their ecologies [7].
Reflecting upon what narrative I wanted to create, I realized how truly little we are aware of these losses in our surrounding environments. As the voices of species are extinguished, are we aware of these absences? Looking around our urban environments, we are confronted with false abundance – we may see a profusion of birds, but a paucity of species [8]. Have our environments become so cluttered with the sonic detritus of contemporary urban life that we are oblivious? Perhaps we confuse what we now hear with memories of what we once heard, or confabulate?

The writer Eva Hoffman declared, “Loss leaves a long trail in its wake. Sometimes, if the loss is large enough, the trail seeps and winds like invisible psychic ink through individual lives, decades, and generations” [9].  It has been has argued that “sharing memory is our default”, and that complex emotions such as grief, love and regret depend upon our personal memories and an awareness of the passing of time. Our imperfect recall is responsible for the endurance of the past within our present relationships [10, 11].
I thought about what the Laurentian forests and lakes would have sounded like in my grandparents’ time, and about the different species that they heard that I will never hear.
How could you describe the call of a bird you’d never heard? If you’d never heard it, could you truly miss it?
What remains between the song and the silence?
An encounter between two elderly birdwatchers spurred my interest in creating a work which not only speaks to my life-long fascination with birds, but examines this fascination in others. Through the use of birdcalls of extinct and threatened species, I wondered if it would be possible to foster a sense of awareness regarding what species we have already lost or are in the process of losing.
So what propelled me forward? Following a discussion with an ornithologist at the Royal Ontario Museum in Toronto, I decided to see if I could get in touch with elderly birdwatchers who would have likely heard these species in the wild. Visiting a centenarian birdwatcher at a retirement home to look at his birdwatching diaries, and with the hope that I might be able to persuade him to do a few birdcalls, I was witness to a fascinating exchange. As he performed some bird calls for me, another elderly gentleman appeared in the doorway, and responded to the bird calls with calls of his own. The two engaged in a call and response of birdcalls for approximately thirty minutes. After the gentleman had left, I found out that due to dementia, he had been unable to hold conversations with others. Yet what I had witnessed was just that, using the voices of birds. It had been profoundly moving to watch and listen to the two men “converse”, and provoked a deeply visceral response in me.
What is it that makes birdsong so compelling? It would seem that it’s all in the genes. Charles Darwin believed that language acquisition is instinctual [12], and subsequent research by Noam Chomsky and his colleagues would seem to support this idea [13, 14]. Research has shown that the same set of genes that enables humans to speak also confers on birds the ability to sing [15-17]. It was further discovered that the way birds acquire specific birdsong seems to mirror the way humans acquire speech [17-20].  Dr. Doolittle’s exhortations to “talk to the animals” just might have some basis in fact.
Perhaps it also speaks to the notion of déjà vu, which refers to the phenomenon of feeling as though something is very familiar when in fact you are experiencing it for the first time. For Steve Goodman and Luciana Parisi,” déjà vu suggests time collapsed onto itself, perhaps some kind of mnemonic haunting or future feedback effect.” [21]. Paramnesia is usually described as a psychopathology in which events are remembered while being experienced for the first time. It is generally thought that this occurrence is far more commonplace than would be expected of a memory disorder. Henri Bergson described paramnesia as a “symptom that explains that there is a recollection of the present, contemporaneous with the present itself”[22, 23]. Thus the calls of songbirds may literally “speak” to our memories of nascent attempts to communicate conferring an uncanny familiarity with their songs. 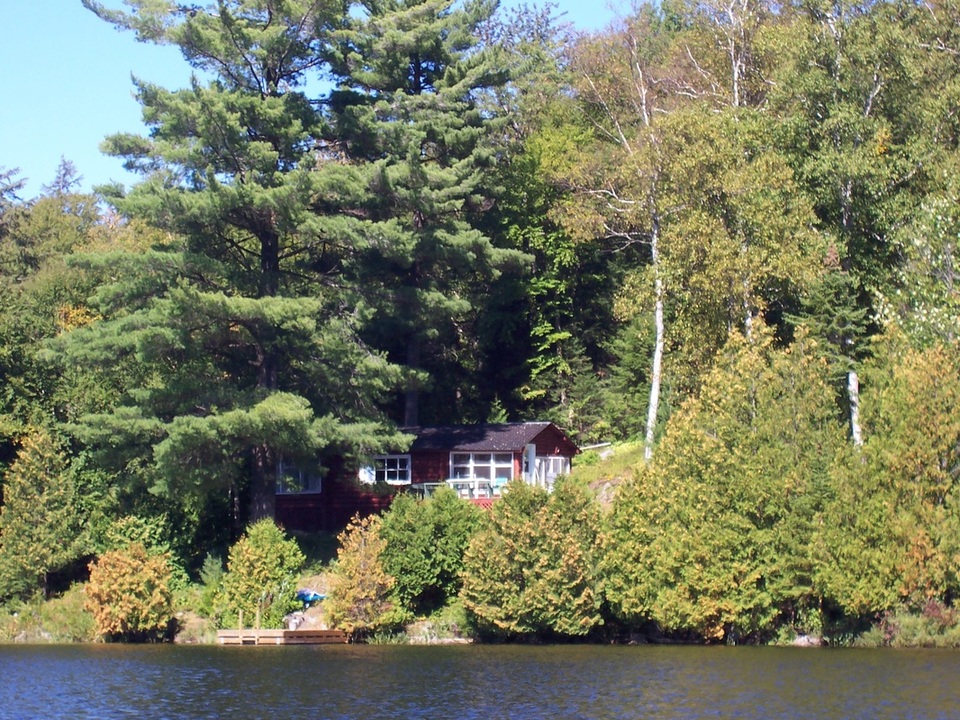